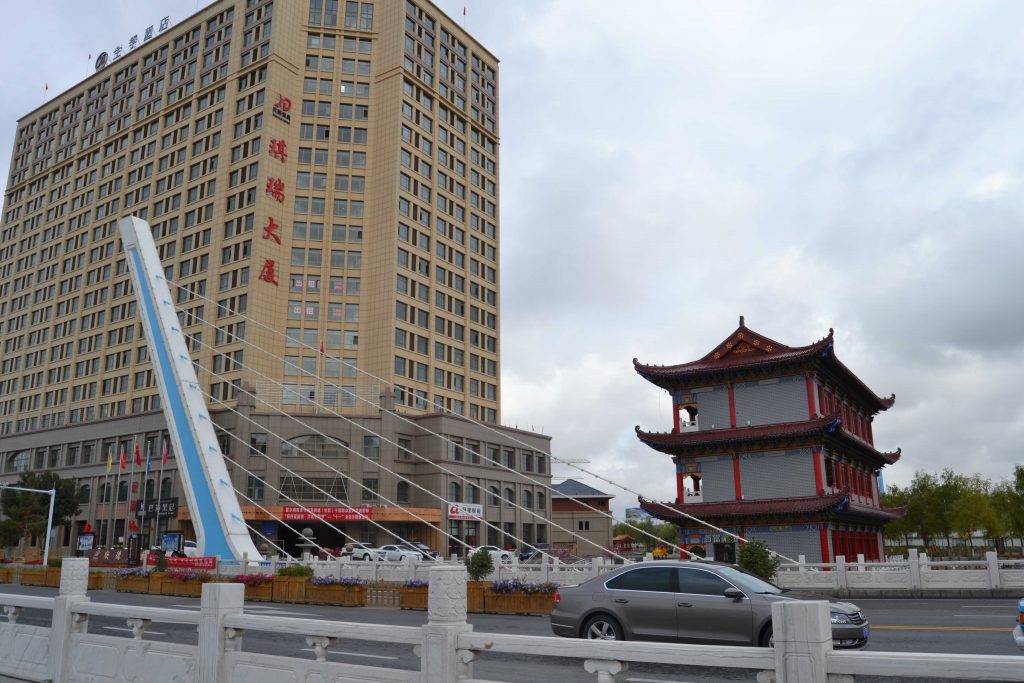 So, after 4 days waiting at the Chinese border it finally opened on the 5th day. First thing that surprised me after a massive security check was the size of the town. While on the Kazakh side of the border were only a few small houses in the steppe, the Chinese have built quite a decent piece of civilisation here in the middle of nowhere. 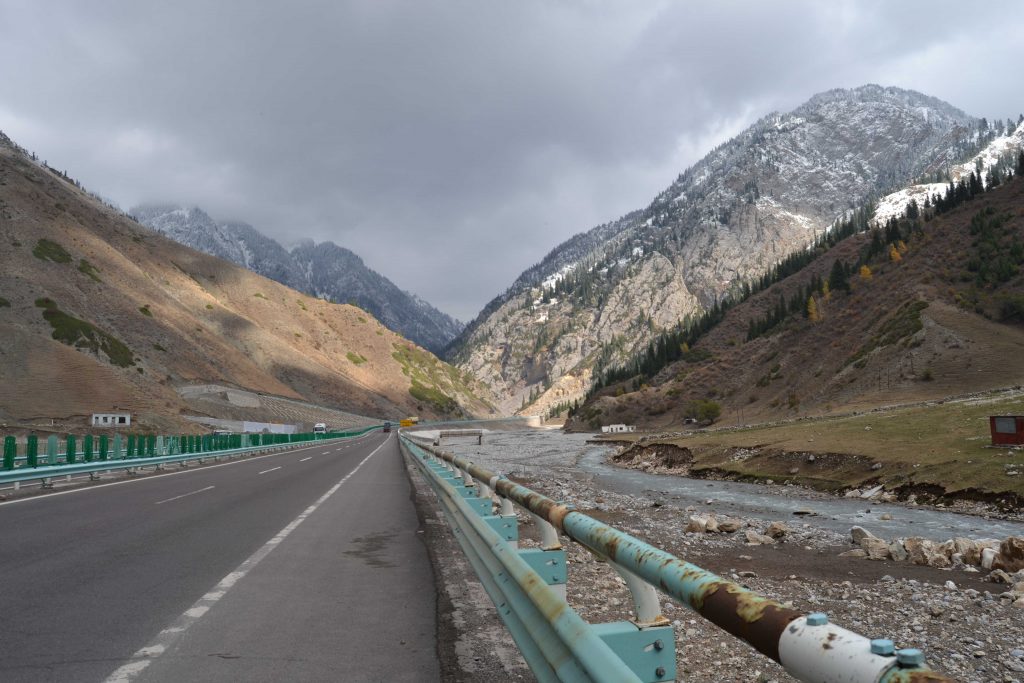 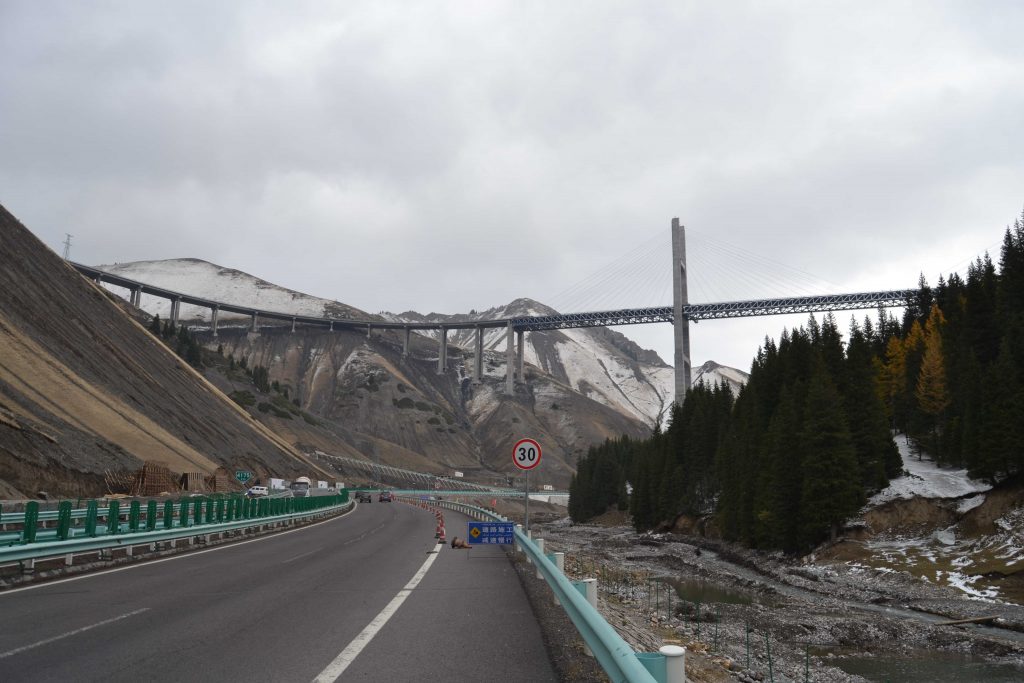 What also surprised me: It can get surprisingly cold in October in Xinjiang. One day before I passed this road up to Sayram Lake it was still closed due to heavy snow. Fortunately they reopened it for sludge-cycling. Impressive, how much effort they put in China to create a perfectly steady slope. 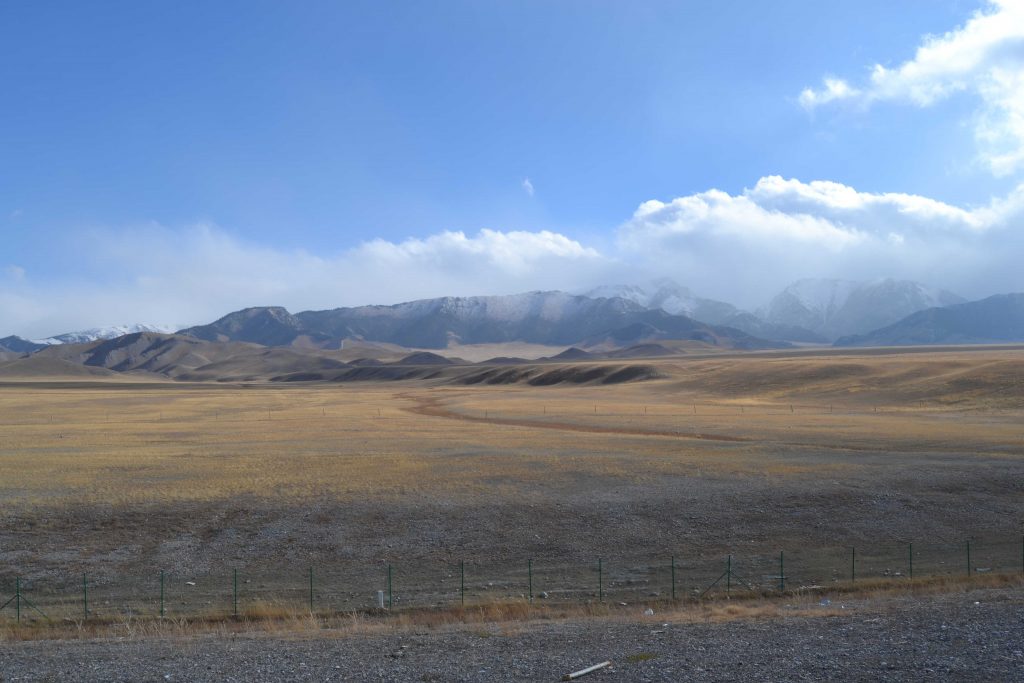 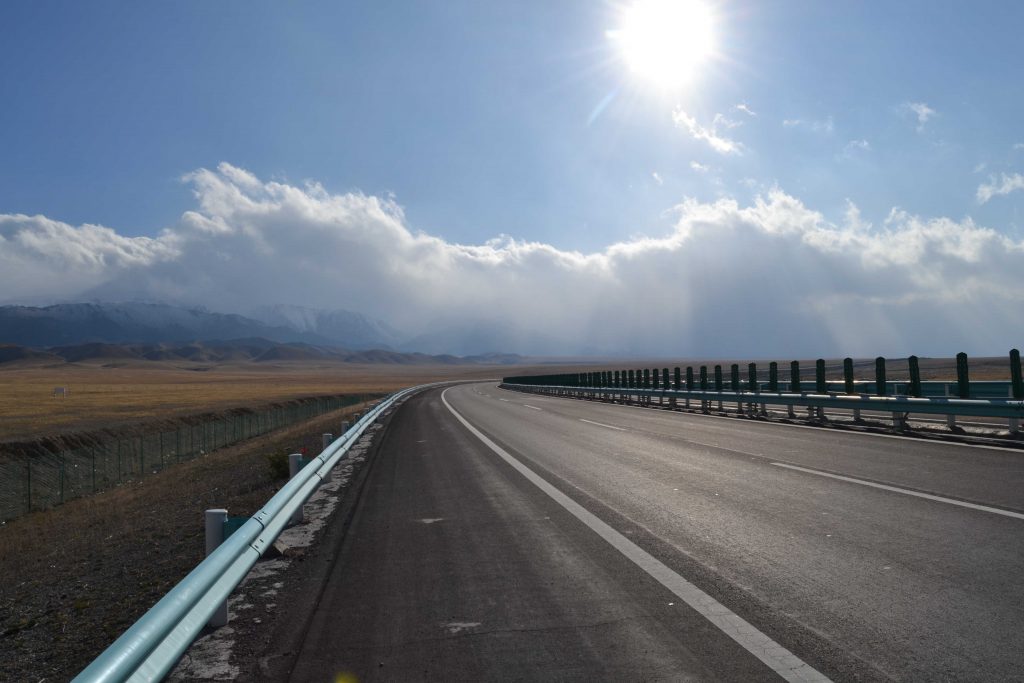 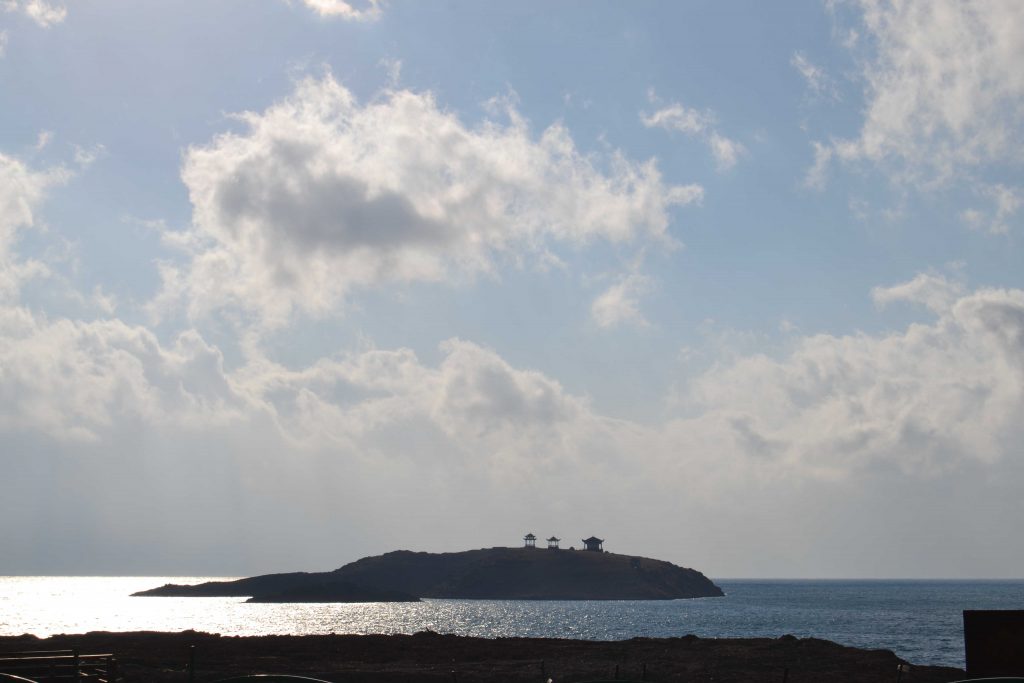 You don’t get to see a lot of Sayram Lake because the road is pretty well fenced all the time. It need some training to find the gaps. However, it was freaking cold up there even though it doesn’t look like that and that was just before the fog came. 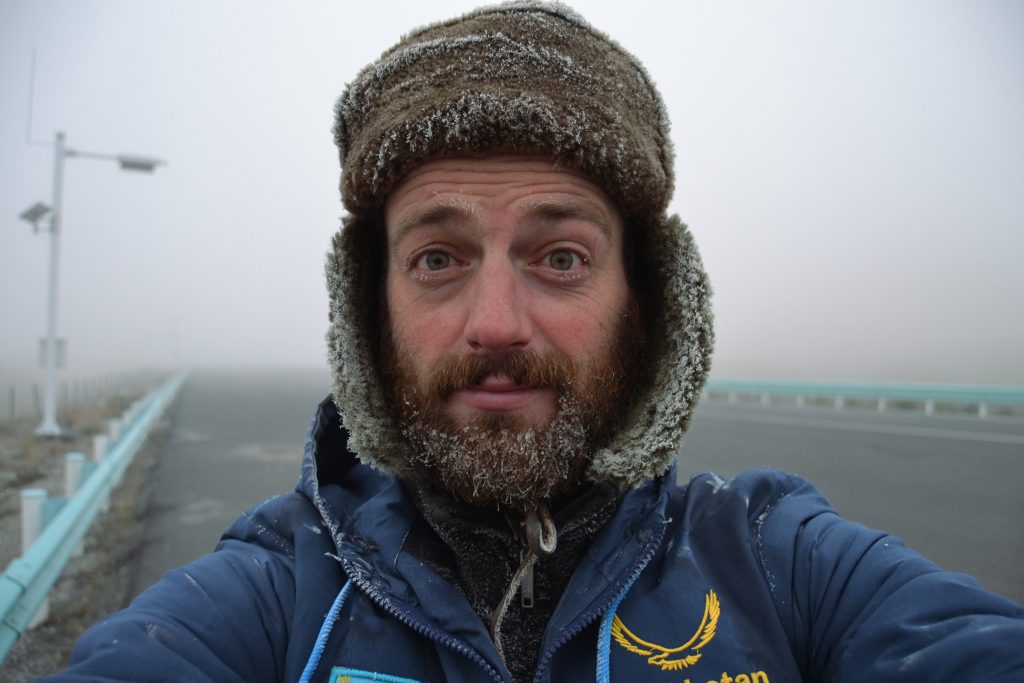 Minus degrees, headwind and fog make funny things with the hair in your face, even my eyelids froze. 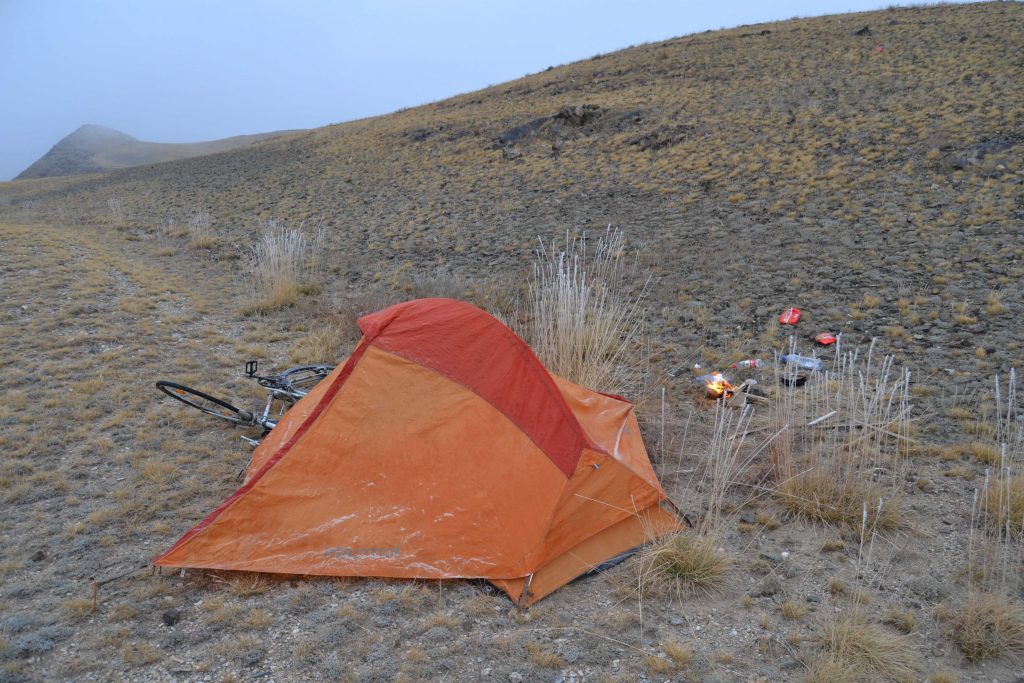 This was so far my coldest night with -10°C. Smart people would have slept a bit further down at lower altitude and would have caught a bit more sleep I guess. 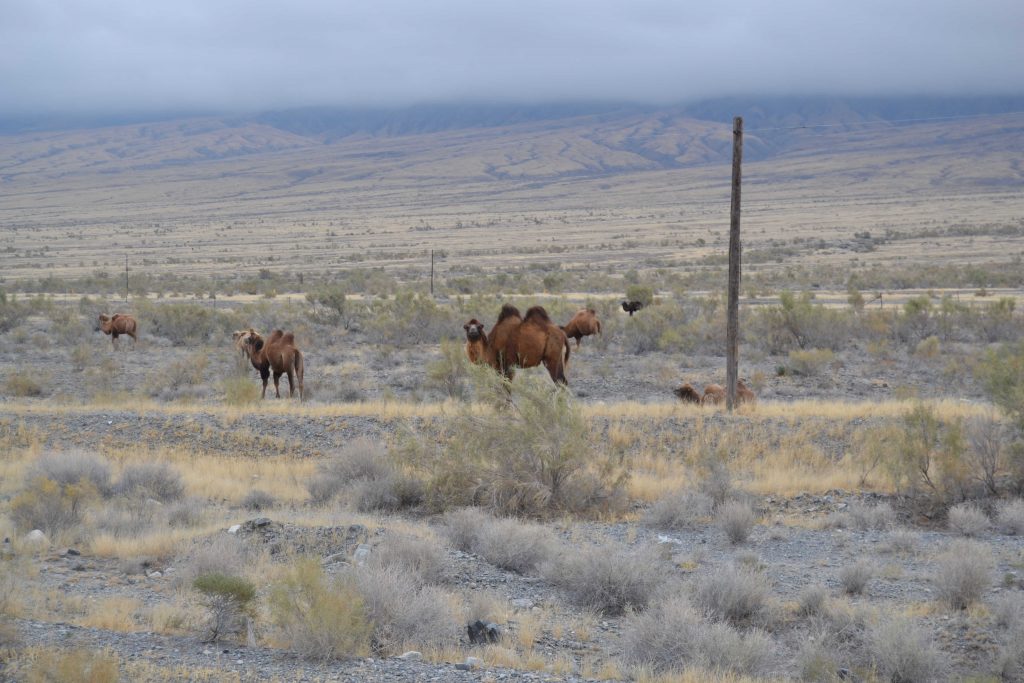 China has also Camels but they look different from the Kazakhstan ones. And it seems to me that these ones are busy with their camel stuff. 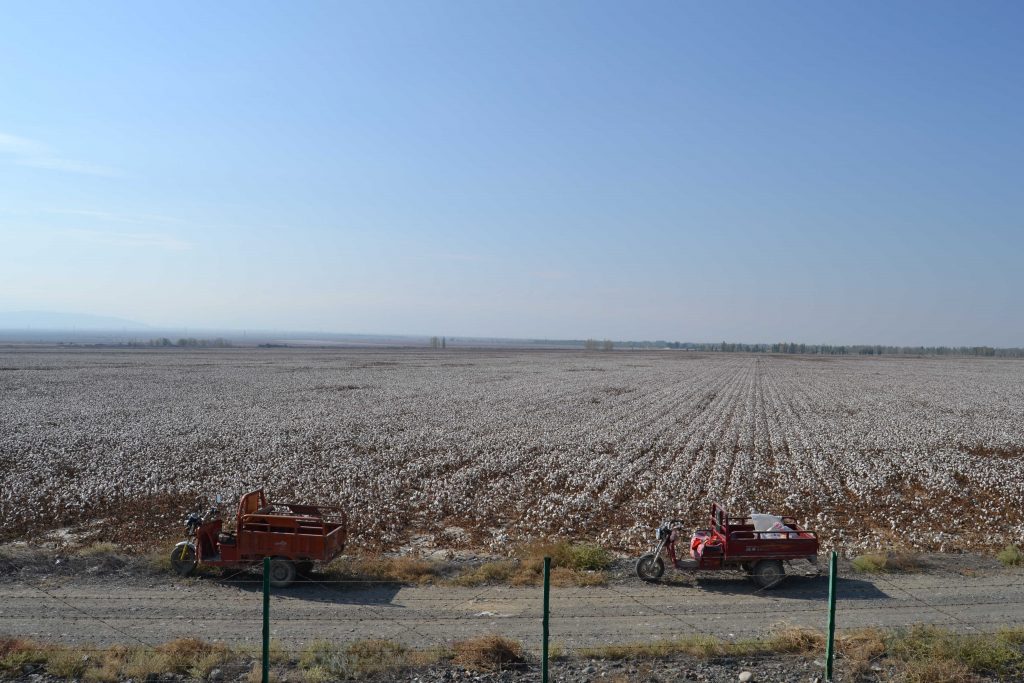 Then came a pretty long stretch of cotton plantations. no idea how they make the cotton grow here where it never rains, I can only guess. These electro-trikes are driving around everywhere, bringing the cotton pickers to the cotton fields and back. They also make a pretty good slip-stream for the stupid cyclists who pass by eastwards. As far as my meteorologic knowledge goes (now), the wind circles counter-clockwise around the Himalayas, making it headwind in Xinjiang if you’re coming from Europe. So, electro-trikes are a very good invention. 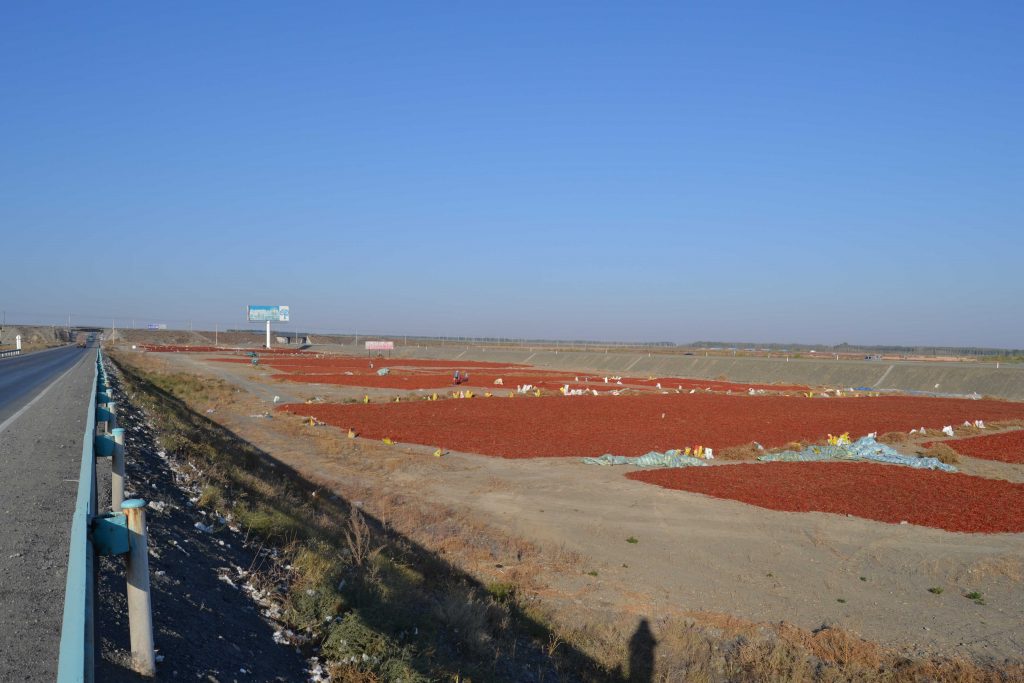 This is chilies drying between the highway and the ‘smaller’ local road which is actually also a highway. China needs lots of chili because they are many and they like it spicy. 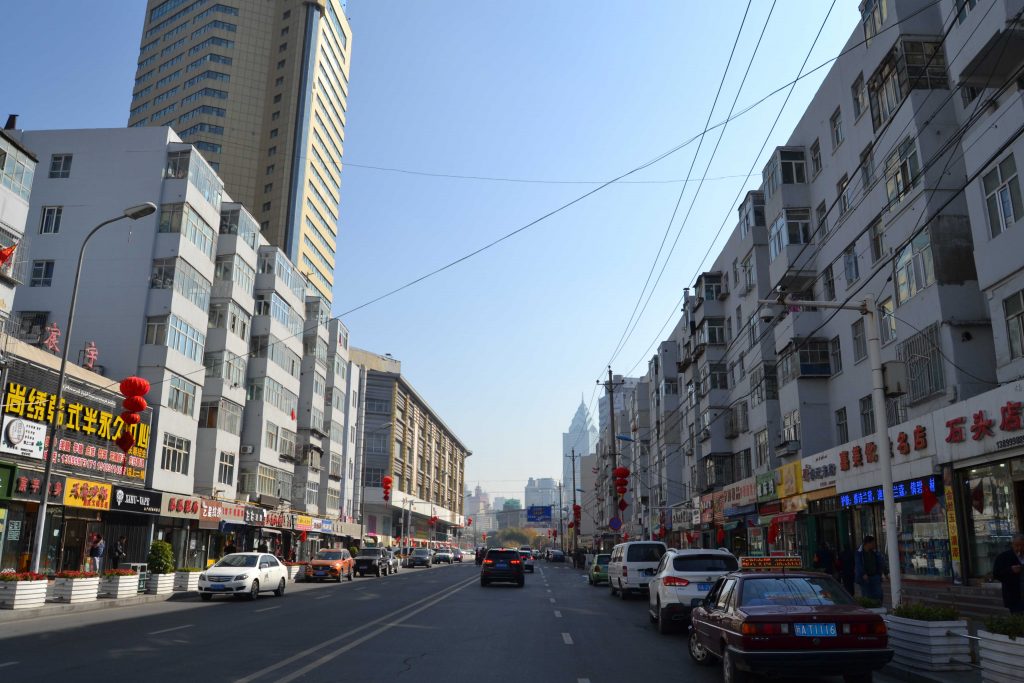 After 700 kilometers of freezing you finally arrive in Ürümqi, the capital of Xinjiang. On the last 120 kilometers I went through 6 police checkpoints, and all of them act as if they are seeing a foreign passport for the first time. I already figured out how to make things faster, certainly a ‘Kazakhstan’ jacket doesn’t help. I learned how to say that I am from Germany and sometimes they even understand me, my success rate is at about 15%, my pronunciation must improve.

Anyways, I had very funny moments with the police, in my opinion they just have a bit too much personnel and not enough to do. Also, during this week was the Chinese National Congress in Beijing and it seemed everyone wanted to do his job especially extraly correctly. After one police check where they checked me for one hour without actually checking anything they dismissed me with the words:”If you make any trouble, call 110.”

After Urumqi starts the desert, with a lot of windmills, unbelievably lot of them (!!!) and it gets a bit lonely and dusty. 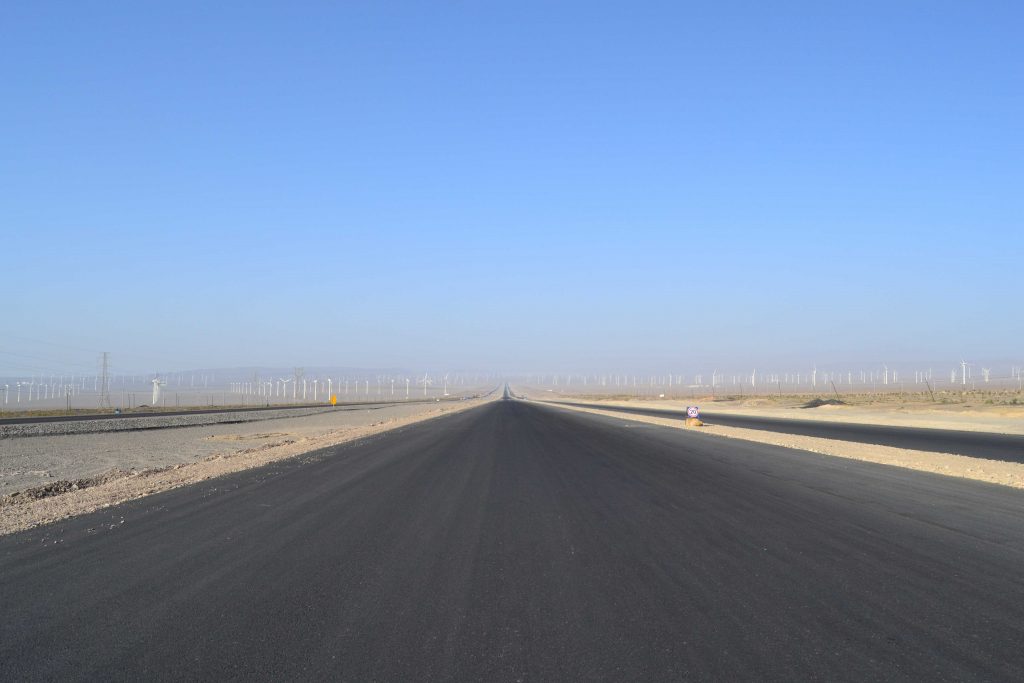 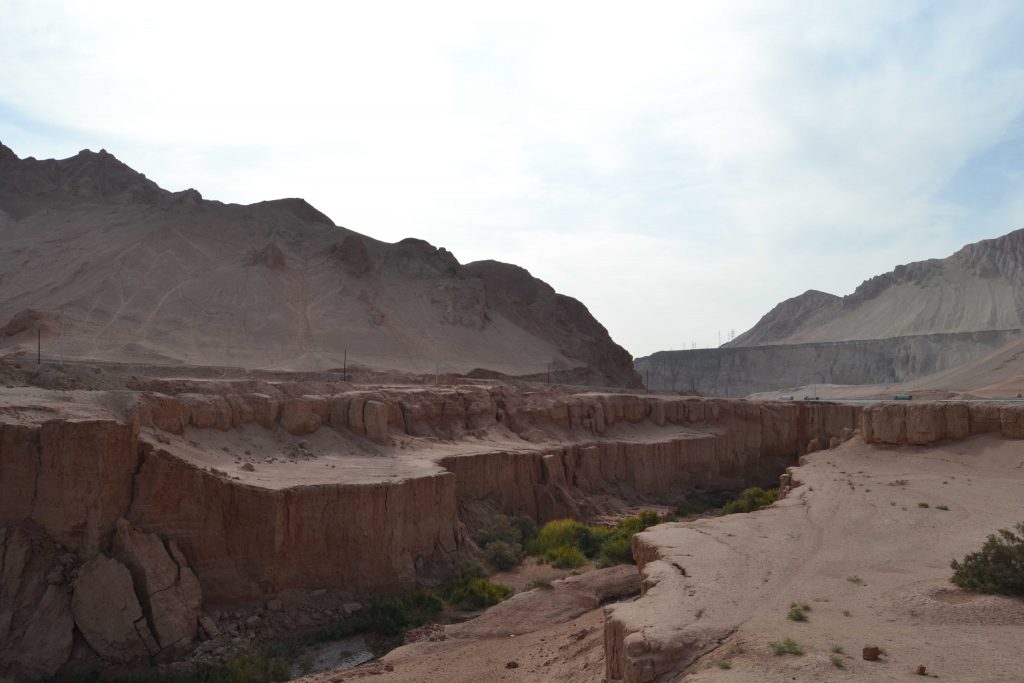 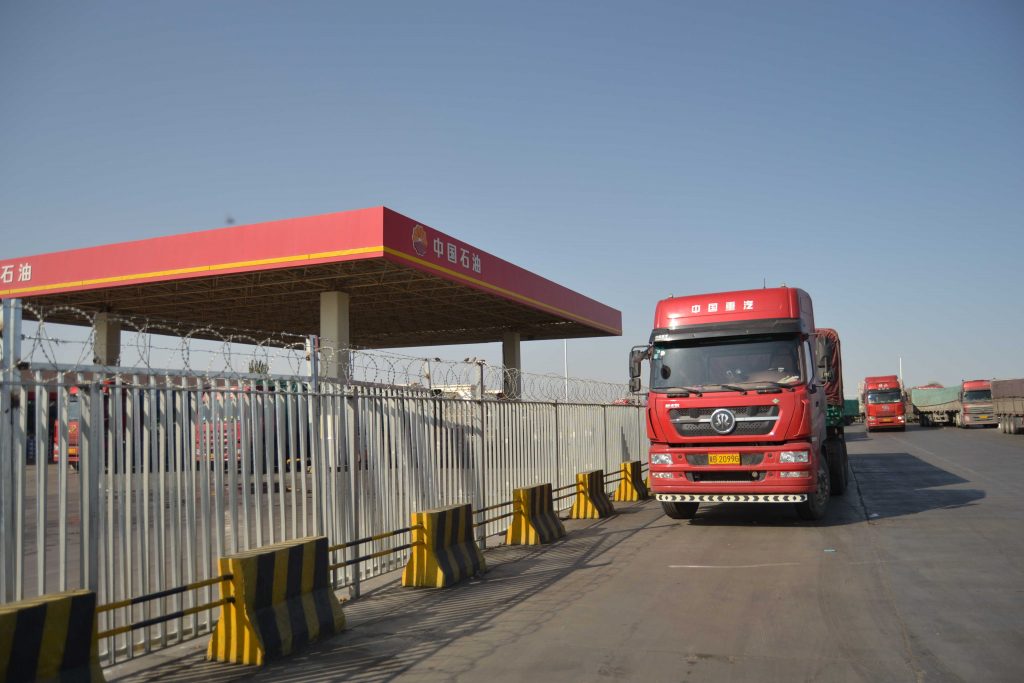 A gas station in Xinjiang looks typically like a high security prison. 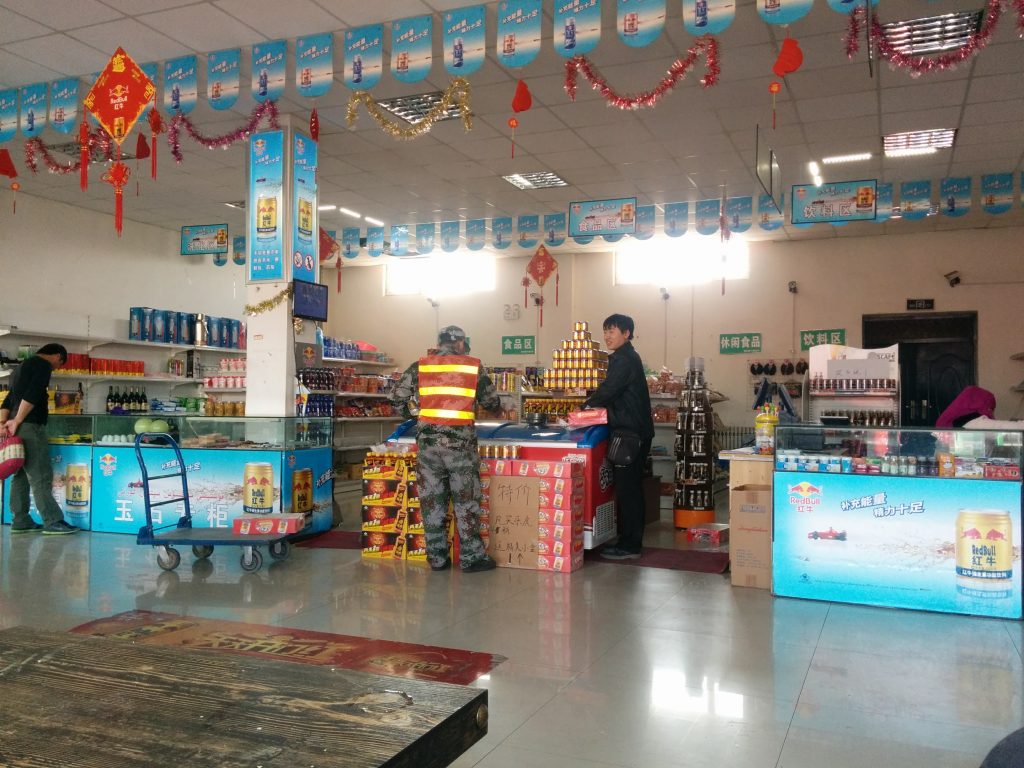 Security and staff are building a pyramid of Red Bull cans in a service station south of Hami. Note the 5 surveillance cameras on the rear wall. 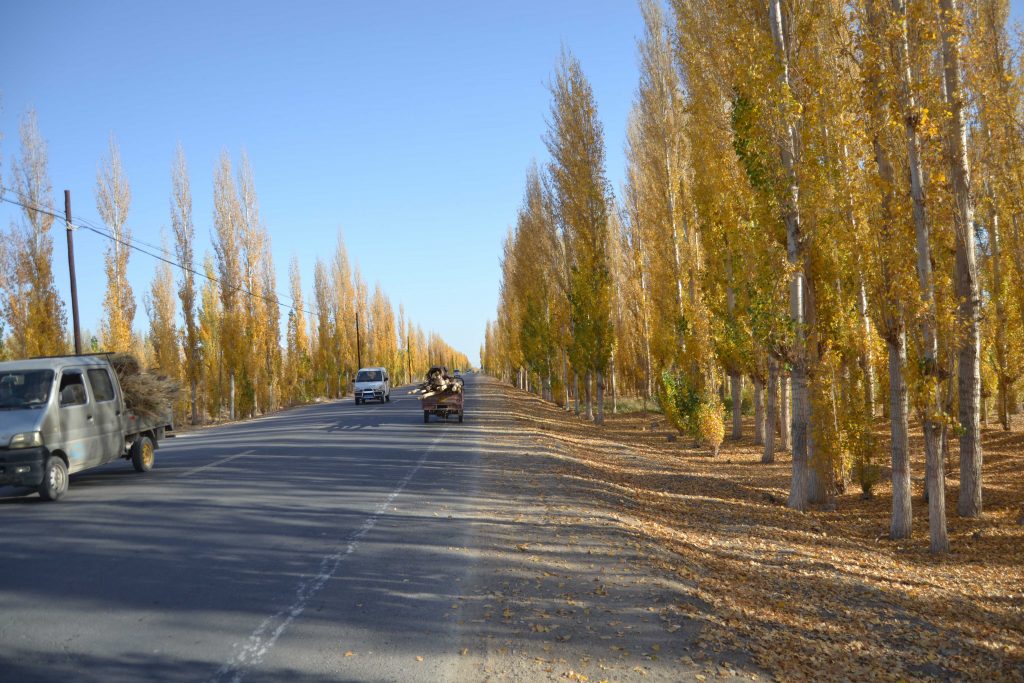 I think everything that grows south east of Ürümqi is growing only through artificial irrigation. 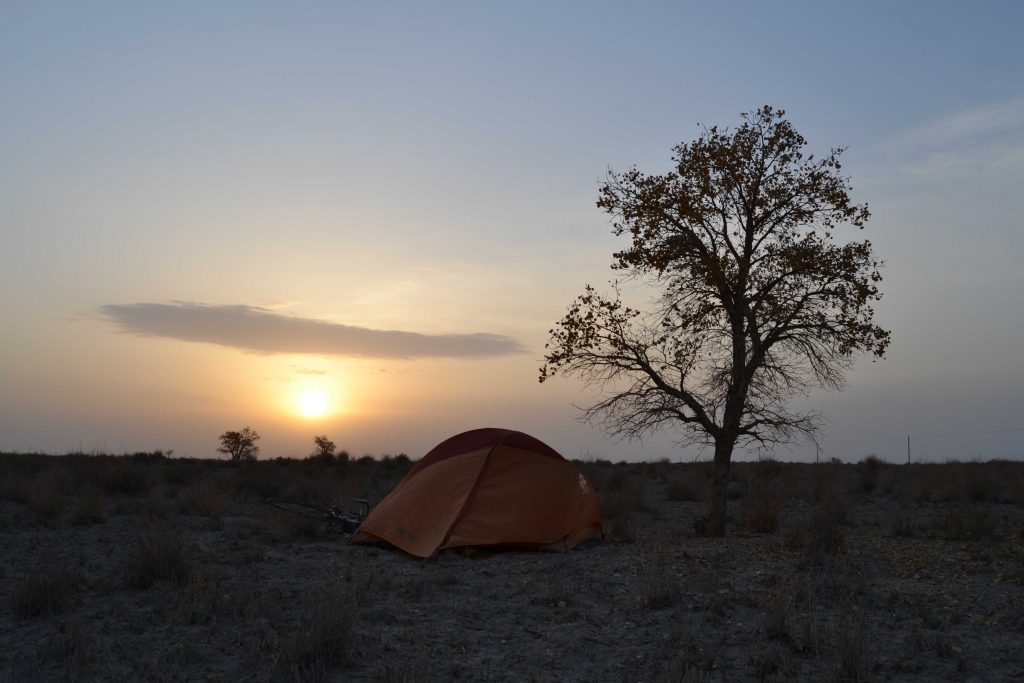 Trying to get up early with the sun. The days are getting noticeably shorter and 13 hours in the tent are very boring. I guess the camping season is more or less over for this part of the hemisphere. Time to head south! 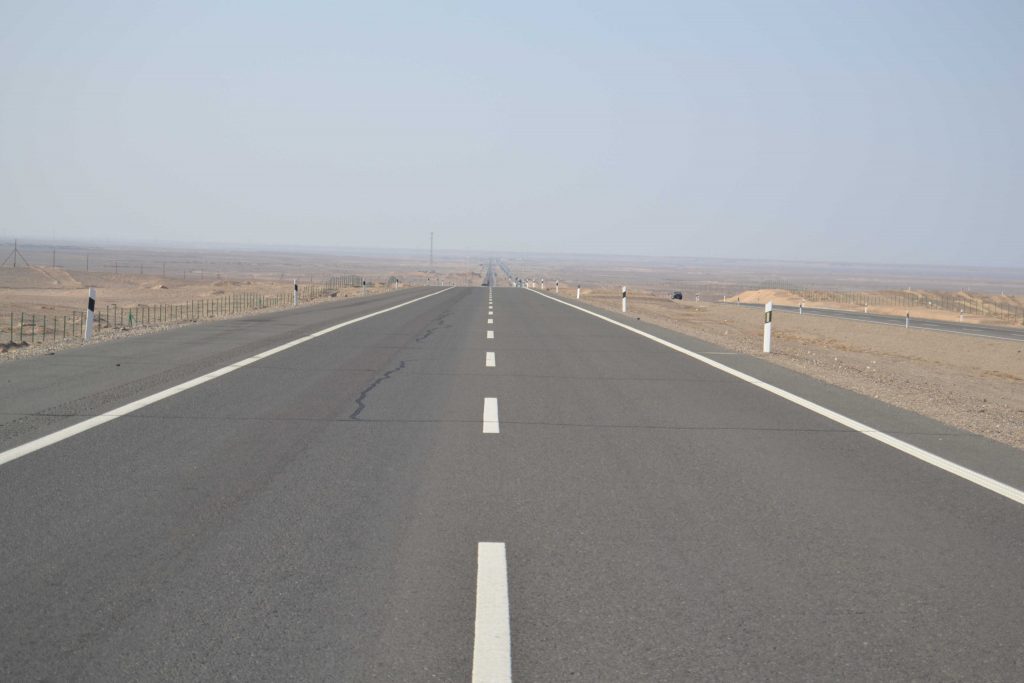 This nothingness can drive people insane I think. 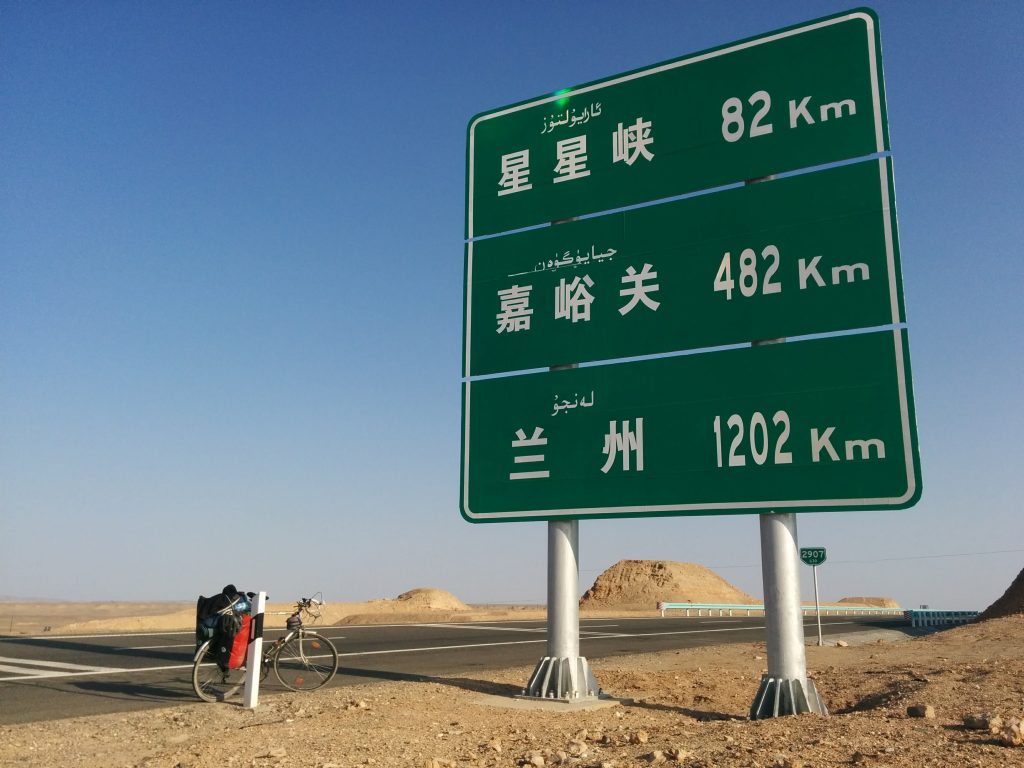